She died in 1913 in Boston, Massachusetts.

She was buried in Mount Cavalry Cemetery, Boston, Massachusetts in a plot that contains: 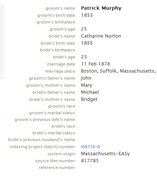 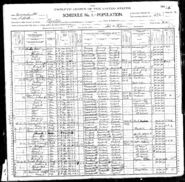 1913 death
Add a photo to this gallery
Retrieved from "https://familypedia.wikia.org/wiki/Catherine_Ann_Norton_(1851-1913)?oldid=1456118"
Community content is available under CC-BY-SA unless otherwise noted.