Cache County is a county located in the U.S. state of Utah. As of the 2010 Census the population was 112,656.[1] Its county seat and largest city is Logan.[2] The county was named for the fur stashes made by many of the Rocky Mountain Fur Company trappers.

Cache County is governed by a seven-member county council and also elects eight officials at large. At the end of 2013, all county elected officials were members of the Republican Party.

View of the valley looking south from North Logan 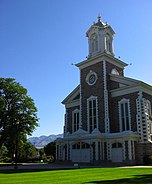 Logan Tabernacle in downtown Logan
Add a photo to this gallery

Retrieved from "https://familypedia.wikia.org/wiki/Cache_County,_Utah?oldid=1018992"
Community content is available under CC-BY-SA unless otherwise noted.