Broward County is a county in the U.S. state of Florida. As of 2016, the population was 1,909,632,[1] making it the second-most populous county in Florida and the 17th-most populous in the United States. Its county seat is Fort Lauderdale.[2]

Broward County is part of the Miami metropolitan area, which was home to an estimated 6,012,331 people at the 2015 census.

Although the area has been settled since about 1400 B.C., Broward County was founded on October 1, 1915.[3] It was named for Napoleon Bonaparte Broward, Governor of Florida from 1905 to 1909, remembered for his campaign to turn the Everglades into "useful land". It was originally intended to be named Everglades County, but then-Speaker of the Florida House of Representatives Ion Farris amended the bill that established the county to be named after Broward.[4] In 1915, Palm Beach County and Dade County contributed nearly equal portions of land to create Broward County.[3]

Broward County began a huge development boom after its incorporation, with the first "tourist hotel", in Fort Lauderdale, opening in 1919. A year later, developers began dredging wetlands in the county in order to create island communities.[3] By 1925, the boom was considered to have reached its peak, but a 1926 hurricane caused economic depression in the county.[3] The structure of county government was signed into law in 1975 with the passage of the Broward County charter.[3]

At its inception, Broward County was considered a leader in agricultural products and services within the State of Florida , but the massive post-World War II buildup of South Florida transformed the region. It was one of the counties at the center of the 2000 U.S. Presidential election recount controversy.

From 2008 to 2011, Broward County led the nation in new HIV/AIDS diagnoses, according to federal health officials.[5] The per capita cases of new infections in Broward has not decreased in over a decade, prompting government health agencies to direct more funding to AIDS prevention campaigns in Broward.[5] During that time period, Dade County was ranked number two nationally for the epidemic. However, as of January 31, 2014, those statistics have reversed, though not dramatically enough to be called an improvement. Some communities in the area have been affected disproportionately, with 48% of the afflicted being in black communities.[6] In Broward County, sexual education in public schools is not mandatory and the curriculum that is employed sporadically has not been updated in ten years or more, according to school officials. In 2013, the Broward County School Board held a vote to require schools to teach sex-ed at least once a year for every grade, a program slated to begin in the 2014-2015 school year if passed.[7]

Broward County has an average elevation of six feet (1.8 m) above sea level. It is rather new geologically and located at the eastern edge of the Florida Platform, a carbonate plateau created millions of years ago. Broward County is composed of Oolite limestone while western Broward is composed mostly of Bryozoa.[9] Broward is among the last areas of Florida to be created and populated with fauna and flora, mostly in the Pleistocene.

Broward approved the construction of Osborne Reef, an artificial reef made of tires off the Fort Lauderdale beach, but it has proven an environmental disaster.[10]

In 2010, 4.7% of the population considered themselves to be of only "American" ancestry (regardless of race or ethnicity.)[16]

As of 2010, Haitians made up the largest population of immigrants, with Jamaicans coming in second, Colombians in third, followed by Cuban exiled refugees in fourth place, then Peruvians, Venezuelans, Brazilians, Dominicans, Canadians, and Mexicans being the tenth highest group of expatriates.[21]

In 2000, with relation to ancestry (excluding the various Hispanic and Latino ancestries), 9.4% were Italian, 7.4% American, 6.8% German, 6.7% Irish, and 4% English ancestry. Also, among West Indians, 5.99% were Haitian and were 5.91% Jamaican.[26] Broward was the only county in the nation outside the Northeast in which Italian-Americans formed the largest ethnic group in 2000. They are concentrated mainly in the Pompano Beach area.[26]

There were 654,445 households out of which 29.30% had children under the age of 18 living with them, 46.1% were married couples living together, 12.5% had a female householder with no husband present, and 37.1% were non-families. 29.6% of all households were made up of individuals and % had someone living alone who was 65 years of age or older. The average household size was 2.45 and the average family size was 3.07.

As of 2005, Broward County led the nation's metropolitan areas in new AIDS diagnoses, with a reported rate 58.4 new AIDS diagnoses per 100,000 people. County officials think the numbers may stem from a new and successful HIV testing campaign that has resulted in many people being diagnosed with AIDS at the same time they've been diagnosed with HIV.[27] Without the implementation of the new testing campaign, the reported numbers of new diagnoses would have probably been lower.

As of 2010, 63.44% of all residents spoke English as their first language, while 22.22% spoke Spanish, 5.42% French Creole (mostly Haitian Creole,) 1.48% Portuguese, 1.41% French, and 0.59% of the population spoke Italian as their mother language. In total, 36.56% of the population spoke languages other than English as their primary language.[28] Since many immigrants are coming from the Anglophone Caribbean, where English is spoken, the change is not as fast as the rate of immigration would suggest.

Broward County Schools has the sixth largest school district in the country and the second largest in the state after Dade.

The Broward County Library is one of the largest public library systems in the country, comprising 41 branch locations. There are also five municipal public libraries in the county that are not part of the Broward County Library: Ethel M. Gordon Oakland Park Library, Lighthouse Point Library, Helen B. Hoffman Plantation Library, and Parkland Public Library.

The County Commission is composed of nine members elected by district. Each Commissioner must be a resident of the district for which he or she seeks election. Each year the Commission elects a Mayor and Vice Mayor. The Mayor's functions include serving as presiding officer, and as the County's official representative. The Commission appoints the County Administrator, County Attorney and County Auditor. The Commission also appoints numerous advisory and regulatory boards.

The County Commission meets in formal session the first four Tuesdays of each month at 10:00 a.m. in Room 422 of the Broward County Governmental Center. Over 507,000 cable subscribers in Broward County have access to Government-access television (GATV) coverage of Commission meetings, which are broadcast live beginning at 10:00 a.m. each Tuesday, and rebroadcast at 5:30 p.m. the following Friday. Meetings can also be viewed via webcasting at www.broward.org.

According to the Secretary of State's office, Democrats maintain a majority among registered voters in Broward County. The county is also one of the few counties in the state where Independents outnumber Republicans among registrants.

Over the past 50 years, Broward County has gone from solidly Republican to solidly Democratic. In the 1964 presidential election for example, the county supported Barry Goldwater by a 56-44 margin, even as he lost in a landslide nationwide, and in the 1972 presidential election, Broward County voters strongly backed Richard Nixon over George McGovern. From the 1976 presidential election onward, however, voters of Broward County have supported the Democratic presidential nominee over the Republican nominee by increasing majorities, except in the three Republican landslide elections of the 80s. Broward County is now the most reliably Democratic county in the state,[36][37] with the exception of the much less populous and majority African American Gadsden County in North Florida. This change in voting tendencies can be attributed to the large migrations of middle and upper-class snowbirds and transplants from more liberal states, a growing LGBT community, liberal positions on social issues such as abortion and gun control, and naturalized U.S. citizens born in places such as Latin America, the Caribbean, Canada, Europe, and Asia.

Construction is underway on a network of recreational trails to connect cities and points of interest in the county.[39][40][41] 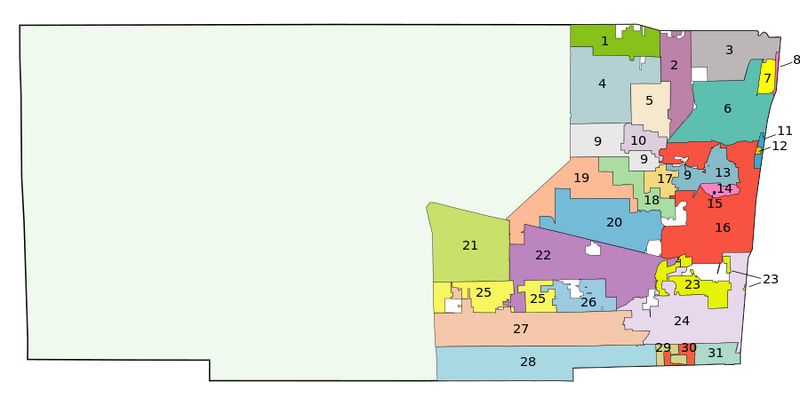 Municipality populations are based on the 2010 Census.[42]

Additionally, with 23 miles of beach, Broward County is a popular destination for scuba diving, snorkeling, and droves of young Spring break tourists from around the world.[44][45]