Bronte is a beachside suburb of Sydney, in the state of New South Wales, Australia. Bronte beach is located 8 kilometres east of the Sydney central business district, in the Waverley Council local government area of the Eastern Suburbs.[2]

Bronte Beach sits on Nelson Bay, surrounded by Bronte Park. Bronte offers scenic cliff-top walking paths south to Coogee via the Waverley Cemetery and north to Tamarama and Bondi Beach. The cliff-top path offers views which extend from Ben Buckler in the north to Malabar in the south. Bronte is located about 2.5 km south of Bondi Beach.

The suburb has been declared the best of 641 Sydney suburbs by the Sydney Morning Herald's Good Suburbs Guide.[3]

Robert Lowe who later became Viscount Sherbrooke, bought 42 acres (170,000 m2) of land from Mortimer Lewis (1796–1879), the Colonial Architect who owned most of the frontage in the area in the 1830s. His home was completed in 1845 and was named Bronte House, for Lord Nelson, who was the Duke of Bronte, a place in Sicily, Italy. The house, a single-storey stone bungalow located in Bronte Road, is owned by Waverley Council and leased to private tenants who hold open days a few times a year. It is now listed on the Register of the National Estate.[4]

Lowe became a member of the New South Wales Legislative Council. He later moved back to England where he became a writer with The Times.

The former Bronte tram line branched from the North Bondi via Bondi Junction line at Bondi Junction, running down Bronte Road and MacPherson Street to Bronte Beach. A feature of this line was the final approach to Bronte Beach in a rock cutting parallel to the Pacific Ocean. The line opened to Waverley in 1890, then to Bronte in 1911. Electric services started to Waverley in 1902, then Bronte in 1911. Through services ran from Circular Quay or Railway Square. The line was closed in 1960 and replaced by a bus service that follows the current route of bus 440.

Bronte has an important surfing culture. The Bronte Surf Lifesaving Club was founded in 1903 and claims to be the oldest surf lifesaving club in the world. An annual long-distance ocean swimming event is held in December each year between Bondi Beach and Bronte.

Bronte is represented in one of the most popular sporting competitions across Australia, the National Rugby League competition, by the local team the Sydney Roosters, officially the Eastern Suburbs District Rugby League Football Club (ESDRLFC). 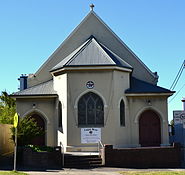 Waterfall, Bronte Gully
Add a photo to this gallery

Retrieved from "https://familypedia.wikia.org/wiki/Bronte,_New_South_Wales?oldid=1203360"
Community content is available under CC-BY-SA unless otherwise noted.