Familypedia
Register
Don't have an account?
Sign In
Advertisement
in: Franklin (surname), Born in 1706, Died in 1790,
and 63 more

Ben Franklin was a prominent politician, scientist, philosopher, inventor, typographer, and chess-player around the time of Independence. 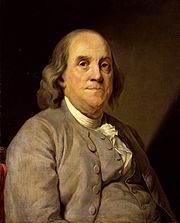