Beaulieu-sur-Mer (French: [boljø syʁ mɛʁ]; Occitan: Bèuluec de Mar; Italian: Belluogo; "Beautiful place [by the Sea]") is a seaside village on the French Riviera between Nice and Monaco. It is a commune in the Alpes-Maritimes department and borders the communes of Saint-Jean-Cap-Ferrat, Èze, and Villefranche-sur-Mer.

Today Beaulieu-sur-Mer is known as a beautiful Mediterranean resort village with quality marina facilities. It is also known as the site of the Villa Kerylos, and a nice place for retirement.

Beaulieu-sur-Mer is a sister city of Tempe, Arizona. Every year, four French students are paired with four American students, and they each spend five weeks in one another's country. This student exchange is with the Tempe Sister Cities organization, which has been voted "Best Overall Sister City Program" in both 1998 and 2004.

Beaulieu-Sur-Mer served as the fictional town of "Beaumont-Sur-Mer" in the hit 1988 film Dirty Rotten Scoundrels and the 2019 film The Hustle. 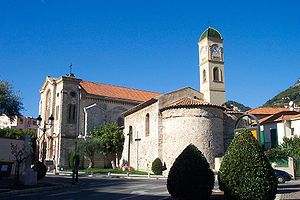 The Villa Kerylos is a structure on a low rocky promontory by the sea. It was built at the beginning of the 20th century by the archeologist Théodore Reinach and is in the style of an ancient Greek villa at the time of Pericles. The Villa was bequeathed to the Institute of France in 1928. It is currently classified as a historical monument.

Retrieved from "https://familypedia.wikia.org/wiki/Beaulieu-sur-Mer?oldid=1532134"
Community content is available under CC-BY-SA unless otherwise noted.