Familypedia
Register
Don't have an account?
Sign In
Advertisement
in: FitzRoy (surname), Born in 1735, Died in 1811,
and 21 more

He became Prime Minister at the age of 33 in 1768, leading the supporters of William Pitt. However, he struggled to demonstrate an ability to counter increasing challenges to Britain's global dominance following the nations's victory in the Seven Years' War. He was widely attacked for allowing France to annexe Corsica, and stepped down in 1770 handing over power to Lord North.

He was a son of Lord Augustus FitzRoy and Elizabeth Cosby, daughter of Colonel William Cosby, who served as a colonial Governor of New York. His father was the third son of the 2nd Duke of Grafton and Lady Henrietta Somerset, which made FitzRoy a great-grandson of both the 1st Duke of Grafton and the Marquess of Worcester. He was notably a fourth-generation descendant of King Charles II and the 1st Duchess of Cleveland. His younger brother was the 1st Baron Southampton. From the death of his uncle in 1747, he was styled Earl of Euston as his grandfather's heir apparent.

Lord Euston was educated at Westminster School, made the Grand Tour and obtained a degree at Peterhouse, Cambridge.[1] On 29 January 1756, he married The Hon. Anne Liddell, daughter of Henry Liddell, 4th Baronet Ravensworth, 1708-1784. They had three children:

After the Duchess had become pregnant by her lover, the Earl of Upper Ossory, she and the Duke were divorced by Act of Parliament in 1769. Two months later, in May 1769, the Duke married Elizabeth Wrottesley (1 November 1745–25 May 1822), daughter of the Reverend Sir Richard Wrottesley, Dean of Windsor.[2] They had the following children:

In 1756, he entered Parliament as MP for Boroughbridge, a pocket borough; several months later, he switched constituencies to Bury St Edmunds, which was controlled by his family. However, a year later, his grandfather died and he succeeded as 3rd Duke of Grafton, which elevated him to the House of Lords.

He first became known in politics as an opponent of Lord Bute, a favourite of King George III. Grafton aligned himself with the Duke of Newcastle against Lord Bute, whose term as Prime Minister was short-lived largely because it was felt that the peace terms he had agreed at the Treaty of Paris were not a sufficient return for Britain's performance in the Seven Years War.

In 1765, Grafton was appointed a Privy Counsellor; then, following discussions with William Pitt the Elder, he was appointed Northern Secretary in Lord Rockingham's first government. However, he retired the following year, and Pitt (by then Lord Chatham) formed a ministry in which Grafton was First Lord of the Treasury but not Prime Minister.

Chatham's illness, at the end of 1767, resulted in Grafton becoming the Government's effective leader (he is credited with entering the office of Prime Minister in 1768), but political differences, the impact of the Corsican Crisis and the attacks of "Junius" led to his resignation in January 1770. Also, in 1768, Grafton became Chancellor of Cambridge University. He became Lord Privy Seal in Lord North's ministry (1771) but resigned in 1775, being in favour of conciliatory action towards the American colonists. In the second Rockingham ministry of 1782, he was again Lord Privy Seal. In later years he was a prominent Unitarian.

The Duke of Grafton's Government

Titles from birth to death 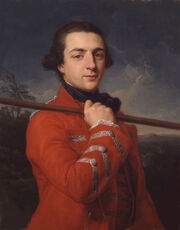