Arthur was born in 1867 in Plainfield, New Jersey. His birth certificate has not been found in the New Jersey Archive.

He dropped out of school after the 8th grade according to the 1940 United States Census.

In 1900 Arthur was living with his parents in Rye. Also living in the house was: LeBaron; Harry; Grover Dunne aka Grover Cleveland Lindauer; and Louis Miller (1887-?). In 1910 Oscar was a boarder at a house on Smith Street in Rye, and he listed his occupation as an "actor in theater". In 1918 the city directory listed him as an acrobat. In 1920 Oscar was again living with his parents at 209 Locust Avenue in Rye and working as an "athletic coach".

The oral family story that was passed down from Clara Freudenberg (1889-1959) to Selma Louise Freudenberg (1921-2009) was that Anna Augusta Kershaw and Charles Frederick Lindauer, had twin sons that worked in the circus and were trapeze artists. One was called Arthur and his circus name was Bandy and his brother's circus name was Tune. Bandy and Tune traveled through Europe as circus performers. It was with great delight that in the 1900 United States Census, Arthur Oscar Lindauer listed his occupation as "trapeze performer" confirming this story. It is not known if Oscar had a twin brother. He had a brother, Harry, that died in 1921 of syphilis; and a brother, LeBaron, that worked as a gardener for a large estate in Rye.

Oscar never married and died in 1944 in Grassland Hospital in Mount Pleasant, Valhalla, New York. He was living with his brother, LeBaron, at 46 Orchard Avenue in Rye. The cause of death was a carcinoma of his right salivary gland. He was buried in Greenwood Union Cemetery in Rye, New York.

"Arthur Lindauer, resident of Rye for the past fifty years, died at Grasslands Hospital on Wednesday, following a three-months confinement there. He was seventy-seven years old and lived at 46 Orchard Avenue. Mr. Lindauer, a bachelor, was a retired circus performer. He was born in Plainfield, N. J., the son of the late Charles Frederick Lindauer and Anna Augusta Kershaw. Funeral services will be held at two o'clock tomorrow afternoon. Interment will be in Greenwood Union Cemetery. He is survived by a brother, LeBaron Lindauer of the same address and one sister, Mrs. Anna L. Lowe of Oakwood Avenue."

1900 as a trapeze performer in Rye, New York

1915 New York census as a handyman in Rye, New York 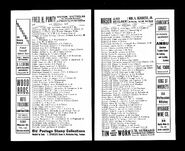 1920 US census working as an athletic coach in Rye, New York

1944 obituary
Add a photo to this gallery
Retrieved from "https://familypedia.wikia.org/wiki/Arthur_Oscar_Lindauer_(1867-1944)?oldid=892769"
Community content is available under CC-BY-SA unless otherwise noted.