For others with the same name see Anna Catharina Cronman

Anna Catharina Cronman can be either the sister of Joachim Cronman (c1635-1703) who married von Knorring or she can be the daughter of Joachim Cronman (c1635-1703) who married von Rohr. Anrep's standard genealogy conflated the two. See Anna Catharina Cronman (1630-?). Gabriel Anrep made the original error that conflated the Anna Cronman born around 1630 with the one born around 1660 and other genealogists have repeated his error. That error was corrected by Gustaf Elgenstierna when he edited and republished the Anrep genealogy in the 1920s. The error occurred because of the age difference between von Rohr and Cronman. There is still a problem in that the 1660 Anna appears to be too young to be the mother of the first von Rohr children. The 1630 Anna would be too old to be the mother of the von Rohr children. The most reasonable explanation would be that the 1660 Anna was the mother of the later born von Rohr children and was not the mother of Joachim von Rohr (1678-1757) as shown in every genealogy.

She was born around 1660. Several sources list her as born in 1667. However if she was the mother of Joachim von Rohr (1678-1757) she would have been just 11 years old when he was born. If we adjust her age to 1660 she would be 18. Almost every genealogy lists her as his mother. Either one of the earlier wives of Hans Christoffer von Rohr (1626-1700) is the mother, or Anna was born around 1660. There is a listing for an Anna Catharina Cronman born around 1660 that is assumed to be the one that died in 1661 and it is assummed that our Anna was named for her.

She died on December 03, 1685 in Angered, Sweden. She would have been 25 years old if born in 1660. This would have her dying after the birth of her last child. 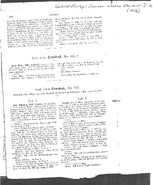 Gabriel Anrep made the original error that conflated the Anna Cronman born in 1630 with the one born in 1660.

Gabriel Anrep made the original error that conflated the Anna Cronman born in 1630 with the one born in 1660.

Anna Catharina Cronman (c1660-?) with 1667 as the year of birth from Familysearch.org. However she would have been 11 years old at the birth of her first child.
Add a photo to this gallery

Retrieved from "https://familypedia.wikia.org/wiki/Anna_Catharina_Cronman_(c1660-1685)?oldid=1359698"
Community content is available under CC-BY-SA unless otherwise noted.