Andrew Cowan is the son of William COWAN‎ and Jane Walker.

War of 1812 -- Pension application at the National Archives, Washington, DC 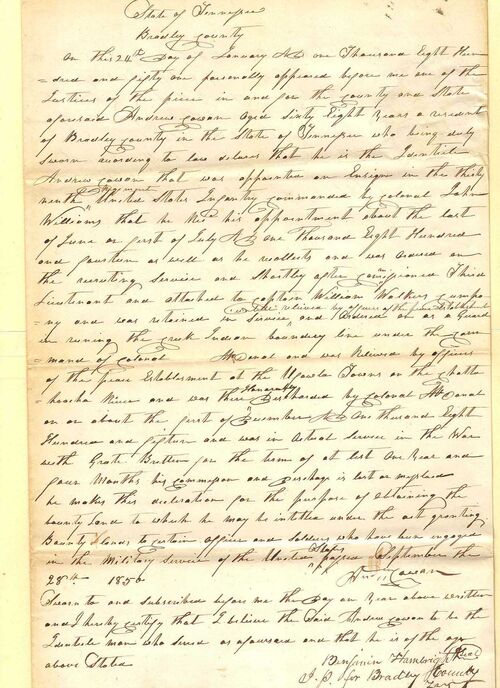 The pension file appears to have TWO Andrew Cowans intertwined as one pensioner (as evidenced by the two SC numbers above). One document (dated 1873) states that the pensioner is being taken off the rolls because it has been determined that he fought against the Union in the recent war, with said document being written after Andrew's death in 1872!
However, Andrew's son, Andrew Finis Cowan, DID fight for the Confederacy and lost his right arm in the war.
Remarks in the file: Auditor’s report shows that Andrew Cowan was appointed Adjutant Genl. To Maj. Gen. Cock’s Div. E. Tenn. Volunteers 09/20/1813, but no period of service is given. (Because the two Andrews are in the same pension file at the Archives, it is difficult to determine which of the two Andrews these last remarks refer to.)

From the Cowans of County Down:
"He moved as a child with his parents from Virginia to Blount Co., Tennessee. After marriage he settled on a farm three miles from Maryville where he lived for twenty years, then moved to a farm on Nine Mile Creek above Niles Ferry, living there nine years. He then bought and located on a farm ten miles south of Cleveland on the public road from Cleveland, Tennessee to Dalton, Georgia. There he lived until his death in his 91st year."

Biographical Directory of the Tennessee General Assembly, VOLUME I, 1796 - 1861, edited by ROBERT M. McBride and Dan M. Robinson (reprinted in 1975 by The Tennessee State Library And Archives and the Tennessee Historical Commission), p. 167.

The green text is a questionable "fact".
The red text is incorrect.
Explanations of these errors and/or questionable facts are found on the Errors Explained page.

As to the children mentioned in the bio:
Carl Brown's website claims there was another child … Alfred Cowan … but I haven’t been able to prove it. As Andrew was 13 years older than Hetty, it is possible (but not proven) that Hetty could have been his second wife. If he was married prior to Hetty, he could have had one or more children by his "first wife" as claimed by Carl Brown. If Andrew was married prior to Hetty, then his marriage to Margaret Fisher would be his third marriage??
Carl Brown's website has Hetty Houston [incorrectly] as daughter of James Houston and Phoebe McClung. (Perhaps, therein lies the potential error. Need to check to see if James Houston and Phoebe McClung had a daughter named Hetty ... and whether she possibly married an Andrew Cowan, who might be the Andrew Cowan that died in 1840????) His website shows Alfred in the 1850 Census, Missouri, Dade, District 25 with wife Jane Cowen (45 TN), Houston (22 TN), Hetty (20 TN), Andrew (17 TN), James (13 TN), Alvina (10 TN), Nancy (8 MO), Mary (5 MO).
The Alfred on Carl Brown's website is more likely the son of the Andrew Cowan that died in Blount Co., TN in 1840 (prior to the census) and, according to his will, was 68 years old (making him born about 1772). His will states he had a son named Alfred.

Note: Annie (Cowan) Stephens application is a very, very early application and is not well documented. In fact, her documentation for William Cowan ties to a William Cowan with military service in Pennsylvania. However, her application is good for providing clues to her heritage. Essentially, the vital statistics she provides are able to be proven by census and other documents.

Please help other researchers by posting your tombstone photos at findagrave.com

If you are a COWAN male, the Cowan DNA Project needs you to help establish links between the various Cowan branches. Click the link and sign up!

NOTE:  Andrew (m. Ester F. "Hettie" Houston) is not to be confused with another Andrew Cowan living in Bradley Co. at the same time.

QUESTION: Who are these Cowans? Their relationship to John [Alexander] Cowan and Andrew Cowan (of Flint Springs, TN)?
In the 1830 McMinn Co., TN census there are two sets (possibly 3) of Cowans, relationship to each other unknown.

:If you are a COWAN male, the Cowan DNA Project needs you to help establish links between the various Cowan branches. Click the link and sign up!

Retrieved from "https://familypedia.wikia.org/wiki/Andrew_Cowan_(1782-1872)?oldid=1199644"
Community content is available under CC-BY-SA unless otherwise noted.