Anastasia Monomachos was born circa 1035 in Constantinople, Byzantine Empire and died 1067 of unspecified causes. She married Vsevolod I Yaroslavich of Kiev (1030-1093) .

Monomachine (circa 1030/35[1] -1067 [2]) is an unknown person by the name of a Byzantine imperial dynasty of Monomakhs, who was married to the Grand Prince of Kiev Vsevolod Yaroslavich, the mother of Vladimir Monomakh in 1046 .

Variants of a personal name: Anastasia, Maria, Irina, Theodora or Anna. In the synodics of Vydubitsky monastery in Kiev she is called Anastasia, the wife of Vsevolod [3]. The version of "Maria" is based on the preserved seals. Perhaps one of the names is her name after taking the vows. 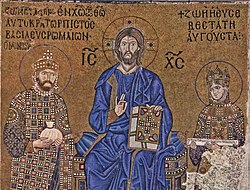 . The chronicle calls Vsevolod's wife "Greek queen", "Monomachina", "Greek" [4], but does not name her name and does not present data on her background. Neither she nor her marriage are mentioned in any Byzantine sources. Undoubtedly, she belonged to the family of the Monomakhs, since she was able to confer this name to her son, and also because it was the representative of this family who ruled the empire in the year of her marriage [5].

It is not clear who was her parents were. It is pointed out that the emperor Constantine IX Monomachos (c1000-1055) was her relative, perhaps the father, since he did not have a big family. Constantine was the only representative of the Monomakh family on the Byzantine throne, and received the throne due to his third marriage, in 1042, with the already elderly Empress Zoya, whose marriage remained childless. Before that he was married twice - the name of his first wife is unknown (also childless), the second was Elena Sklirena, the granddaughter of General Varda Sklira, the niece of Emperor Roman III Argyre (the previous husband of Princess Zoe). After Helena Sklicena's death, the Emperor Constantine took her cousin Maria Sliceren (died 1044) as mistress and placed her in the imperial palace in parallel [6] with her marriage to Zoya. Also known to his mistress is the "Alanian" princess - perhaps Irina, the daughter of the Bagratid prince Dmitry (died 1042, son of George I). It is believed that the Russian bride was either a legal daughter from Elena Sklicena's wife, or an illegitimate daughter from Maria Skliren; However, there are no references to the birth of Constantine. The origins of Feofano, her contemporary and the wife of the emperor of the Holy Roman Empire, are also mysterious - it was formerly believed that she was the daughter of the emperor, but now she assumes that she also belonged to the Sklic family.

In 1043 the last campaign of Kievan Rus (the only one after baptism) took place on Constantinople - the Russo-Byzantine War of 1043 . They were commanded by the son of Yaroslav the Wise - Vladimir Yaroslavich . The reasons for the campaign are disputed. During the battle, the Russian fleet, which suffered from Greek fire and was destroyed by a storm, was defeated and forced to retreat. Constantine IX received an indemnity. Probably, as a sign of peace with Russia, Konstantin issued a "princess" to marry another son of Yaroslav, Vsevolod, the son of Princess Ingegerda of Sweden. It is characteristic that the father of Yaroslav the Wise - St. Vladimir - half a century earlier (about 988) married Anna, the sister of the Byzantine emperor, and the Empress Zoya mentioned above was her niece.

A researcher of Russian-Byzantine relations writes:

The position of Byzantium is also somewhat obscure. If we admit that "in 1043 Byzantium proved to be the winner and in the year of peace, nothing threatened her anywhere," then what prompted Constantine Monomakh to extradite her daughter for Vsevolod? (...) Meanwhile, as a result of the war in 1043, the daughter of the emperor, a possible heir to the throne (if you take into account the advanced age of Empress Zoya and Theodora), is the wife of Yaroslav's fourth son, Vsevolod, who at that time had little chance of taking his father's throne. According to the norms of diplomatic relations of that time, dynastic marriage in peacetime meant recognition of equality and mutual interest of the parties. If the marriage was concluded as a result of the military campaign and was one of the conditions of the peace treaty, it is natural to assume that this condition was put forward by the interested party,

- [3] In this case, any princess from the imperial house was at that time an extremely important person in the line of the succession to the succession of Byzantium, because Constantine IX Monomakh, his wife Empress Zoe and her sister Empress Theodore were childless, and on them the Macedonian dynasty , eventually, on the throne ascended Michael VI Stratiotik . The presence of Constantine's legal daughter would have allowed her to marry a suitable candidate and continue the dynasty, but since this did not happen, this confirms the assumptions about either the illegitimacy of Monomahini, or about her very distant relationship with Constantine.

Information about this marriage is very scarce. "The instruction of Vladimir Monomakh " says:

"Az thin, grandfather of his Yaroslav, blessed, glorious, baptized Basil, Rus' name Volodymyr, father vzlyublenym and his mother Mnomakhy [9]…»{{конец цитаты|источник=[10]Actually, historians know about this marriage only by a short entry in the " Tale of Bygone Years " in 6567/1053 , that "Vsevolod's son Volodymyr was born from a Chesape bastard" ( Ip. , 149) )[11]. .

On the young age of Monomahini at the time of marriage says the fact that the firstborn in them with Vsevolod was born only 7 years after the wedding. According to the appearance of her supposed father Constantine, one can draw a conclusion about her beauty: she, like him, could be white, with thick red hair, bright blue eyes, graceful physique [14] .