Familypedia
Register
Don't have an account?
Sign In
Advertisement
in: Reid (surname), Born in 1840, Died in 1912,
and 3 more

Jane was the elder daughter of twice-widowed John H. Reid, whose first wife Sophronia Prentiss had died at age 29, due to mob pressures near the time of the exodus from Nauvoo, Illinois, leaving him with two little girls to raise. John had then married Sophronia’s younger sister, Almira, who had left her parents’ family to come live with John and take care of the babies. But she, too, died after about a year. The girls then were tossed from pillar to post, as John H. had to be gone a lot with his business and on a mission to Kentucky for the Church. He would pay well to have them with people, who proved untrustworthy. When he learned of abuses, he took the girls back with him, though they had to stay alone a lot. By this time, Jane, the older of the two was “past 12 years old.”

When Jane was about 14 years old, she had gotten tangled up with a couple of shady young men, and was subsequently kidnapped by them, transported by carriage and stagecoach across several state lines, and coerced into marrying one of them, Enos McMurray Huddleston, a fellow born in England, about three years her senior. But the young man was so abusive that, pregnant, she escaped and made her way back to her grieving father. Jane began working and living on her own for about a year, making a living for her and her baby boy. Then her father had begged her to come home, saying he needed her help in his work.

Her son Josey was born in Newton, Iowa, county seat of Jasper Co. (Nowhere near Hillsboro Co.) The town would later become famous as the headquarters of the Maytag Corporation. His mother was only 15 when he was born and she would soon thereafter leave his abusive father. She would later remarry to William Wood Hall who would raise Josey as his own son.

At age five, Josey went west to Utah with William and Almira Hall in the David H Cannon Company of 1861. Departure: 1 June 1861 / Arrival: 11-16 August 1861 / 225 individuals and 57 wagons were in the company when it began its journey from the outfitting post at Florence, Nebraska (now Omaha). His mother's journal are part of the historical record for this event.

The Hall Family were participants in the David Cannon 1861 Pioneer Company, a 79 day wagon train traveling from Florence (now Omaha, Nebraska) to Salt Lake City in the early summer. It was the first of 12 such wagon trains of the year. It was a large train of 68 wagons and nearly 300 passengers led by a young 23-year old missionary returning home from England, Elder David H Cannon. Several diary/biographical accounts exist.

At age 21, Almira Jane emigrated to Utah/Idaho with her son, Josey Hudleston, a child from her first marriage. Her sister, her non-member husband William Wood Hall (a recent English Emigrant), and a Welsh girl (Mary Davis) were also with Almira. They were part of the 1861 David H Cannon Pioneer Wagon Company. Her diary is a source reference material for that trek.

Life in the Rockies

In 1880 Almira Jane moved the family to Curlew Valley in Snowville Utah, to keep her son Josey from getting married to a woman she considered undesirable (due to her own experience with a bad marriage / per the journal of her daughter Sophronia.)

The following family links are incomplete:

(Friday - June 7th) "Came out about 7½ - 2½ mi to Ferry at Columbus swam the loose stock—Teams commenced crossing at 9 and were all across at 5. P.M.—Ferry extends about half way across the river. boat coming to the shore on the east side leaving a long distance on the west side to be forded—Quick sand forms it [at] bottom which renders the fording very difficult for loaded wagons—most passed with little difficulty. some teams afraid of the water—In camp near the west bank of the Fork with plenty of water and wood—a very fine Spring about ¾ of a mile from camp[.] our team came in today which raises our number to 61 wagons—They are as follows[:]" 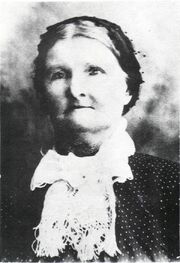