Allen County is a county located in the U.S. state of Ohio. Its population was 108,473 as of the 2000 census. It is included in the Lima, Ohio Metropolitan Statistical Area as well as the Lima–Van Wert–Wapakoneta Combined Statistical Area. 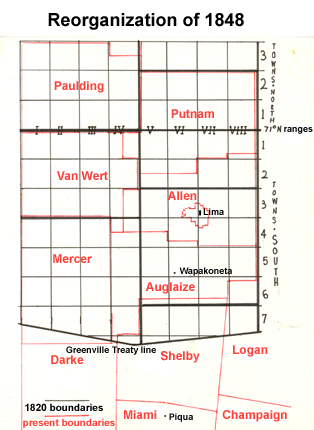 Under the terms of the Treaty of Greenville signed in 1795, northwestern Ohio was reserved for Native Americans. Thus the area now comprising Allen County was off-limits to European settlement until the Treaty of Maumee Rapids in 1817.[5] Under the terms of this treaty, the Shawnee tribe was assigned reservations at Wapakonetta and at their "Hog Creek" settlement along the Ottawa River which comprised most of what is the present-day Shawnee Township. The latter treaty opened the way for the Ohio Legislature on March 1, 1820 to create fourteen counties, including Allen,[5] which was defined as Ranges 5 through 8 east and Towns 3 through 6 south.

The first permanent settlement within the present day bounds of Allen County took place in 1824, when Christopher S. Wood and his family settled in section 7 of Bath Township.[6] The organization of Bath Township predates that of Allen County itself, with its first township meeting held on March 2, 1829. On Feb. 12, 1829, an act of the legislature set aside land for a "county town".[7] Wood was appointed commissioner to determine the location of this "seat of justice" for Allen County. This was done on March 3, 1831, with Wood appointed as Town Director. He laid out plots of land to be sold in section 31 of Bath Township,[8] and the plat was filed April 20, 1831, creating what was the beginning of the city of Lima.

The first court of justice was held in August 1831,[9] and it is believed that the assembly of men, in informal session, selected the name for the seat of justice by drawing names from a hat. The meeting was held at the cabin of James Daniels, which was located on the bank of the Ottawa River near the current location of Market Street.[9] Patrick G. Goode of Montgomery County, special prosecuting attorney at that session, is given credit for having offered up the name of "Lima" (capital of Peru and source of the quinine used to treat the malaria prevalent in the area of the Great Black Swamp). At the County Commission session on June 6, 1831, the formation of a second township, Jackson, was approved.[9]

In 1832 the Shawnees, including those living in the Hog Creek reservation (present day Shawnee Township), were removed to eastern Kansas. They received payment of $30 000 in fifteen annual installments for their lands which had an estimated value of over $200 000 at that time.[10] They arrived at their new home with few provisions and immediately suffered an epidemic of cholera.[10]

There were several practical implications of these changes to the boundaries of Allen County. Lima, the county seat, became located near the center of the county, rather than in the northern quarter. The western part of the county gained a significant stretch of the Miami and Erie Canal, which was completed in 1845. The reorganization also brought the towns of Spencerville, laid out in 1844 and located on the canal,[12] and Bluffton within the bounds of the county.

In 1885, oil was discovered in Lima. This began a boom in Allen County which lasted until after 1910.

One of the more notable annual events in Allen County is its County Fair. Run every August in Lima, Ohio since 1851, the Fair is amongst the foremost agricultural showcasing events in Western Ohio. In 2005, there were over 220,000 visitors and almost 3,000 exhibitors, making it the largest in the state.

The fair has also been notable for attracting many nationally known performers during the 1980s and 1990s, and combined with significant renovations to the county show grounds, these two factors have contributed to a marked increase in attendance and notoriety over the past two decades.[15]

Retrieved from "https://familypedia.wikia.org/wiki/Allen_County,_Ohio?oldid=648737"
Community content is available under CC-BY-SA unless otherwise noted.