The family may have originated in Nes og Hidra in Norway and took their family name from the municipality.

His partner is paired skating was Freda Maier-Westorgaard of Frankenberg.

Champion Skater in Ice Rink. Wednesday night at the ice rink, foot of Pearl Street, will occur a great event in skating annals in Portland. Mr. Alford Nass of Norway, Europe, champion amateur, 500 meter skater of the world, will give an exhibition of his power. Mr. Nass is not only the fastest amateur skater of the world, but also is a great champion fancy skater. He gave an exhibition of fancy and trick skating at the Portland Ice Rink before a small number at the request of the manager, and proved a wonder. He has just come from the great exhibition at Montreal. He is 19 years old, very intelligent. He has won $4000 worth of presents. While here Mr. Nass is stopping with his sister who is employed by Schlotterbeck & Foss. Source: possibly Portland Press Herald; Portland, Maine; 1897 (spelling as it appeared)

Champion Skater of The World. There is in store for the people of Portland a great treat. The managers of the Portland Ice rink have made arrangements with Mr. Alfred Nass, who is one of the greatest skaters in the world to give at the rink Wednesday evening, the 17th, an exhibition of fancy and trick skating. Mr. Nass is just from the great international championship skating contest which has just closed at Montreal, where the greatest skaters in Europe and America have been in competition with each other. In that contest he won two medals of great value which he will wear at the rink. He is in possession of scores of medals won from skating all over the world, and besides has more than $400 worth of presents. He gave an exhibition of fancy work before the managers of the rink and they say that what he can do is simply wonderful, and what he can't do isn't worth doing. Mr. Nass has an engagement at Minneapolis to do fancy skating, and the great M. A. A. A. rink of Montreal has engaged him to give an exhibition there, and he is in great demand. He would not have been in Portland only for his sister, who lives here. The American skaters are not up in the art of fancy work as are the Norwegian people, this you will say when you have seen him. Note: same event being reported as above, different reporter. Source: possibly Portland Press Herald; Portland, Maine; 1897 (spelling as it appeared)

The family was living at Munkedamsveien 41 in Kristiania and they were listed as "Chr. Næss" of Solør working as a "Mekaniker v. mek. værkst." a mechanic and "Jette Næss". His sibling were listed as: "Albert Næss" a "kunst maler (stipendiat)", or an artist on a stipend; and he was listed as "Alfred Næss" a "murer", or a mason. His sister Alvilde was already married and living with her husband.

1897 "Mr. Naess is beyond all question the finest fancy skater ever seen in thus part of the country. Before leaving the rink last evening he was presented with a handsome souvenir of his visit to this city."

1898 manifest possibly with our Alfred Naess 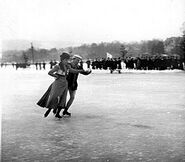 1899 circa in paired skating with Nadja Frank

1899 circa in paired skating with Nadja Frank 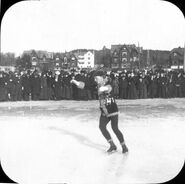 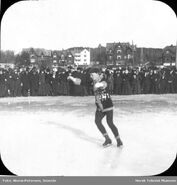 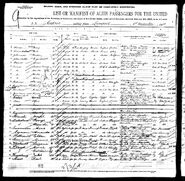 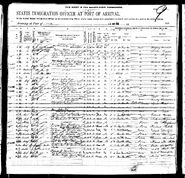 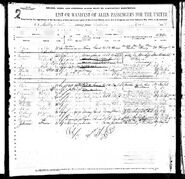 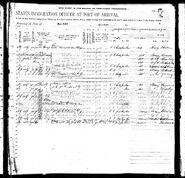 Retrieved from "https://familypedia.wikia.org/wiki/Alfred_Ingvald_Naess_(1877-1955)?oldid=1249948"
Community content is available under CC-BY-SA unless otherwise noted.