Based on the presentation in White 1902:263 Alexander was the son of John Walker II and Katherine Rutherford. He was probably born in Ireland, and immigrated with his parents to America about 1726. After the death of his parents he settled within the Borden Grant in modern Rockbridge County c.1738. Here, he and wife Jane raised their eleven children, nine of whom lived to adulthood. Alexander died about 1786 in Rockbridge County. Jane moved to Woodford Co KY, dying there in 1798.

Alexander Walker of Rockbridge County - Janet "my beloved wife my stock and household furniture" - son Alexander "a mare and two coults" - son Joseph "one coult" - "unto my beloved wife the third of my Land During her lifetime with the use of the Dwelling house." - two daughters Jean and Ketrane (sic.) "a mare... and a sadle and bridle when they arrive at eighteen years...also bed and bed clothes to be provided by sons David, Alexander, and Joseph" - to sons David, Alexander, and Joseph "land I know live on which I purchased of Michael Daugh(?)...if they continue to live on sd. land until my son Alexander comes to the age of twenty-one...land may be sold with the permission of wife but ifthey chose to divide the land then it shall be done as equible as possible with each taking their choice by senority. Should any leave than their part is forfiet to those remaining." -son David and James Walker my son-in-law executors. Dated 5 May 1784 Signed Alexr Walker Witnesses: John Walker, William Walker, Margaret Walker, Alexander Walker Proved: 7 Sep 1784

Records for Rockbridge County area appear in the Augusta County records extracted by Chalkley. These data probably include records for several different Alexander Walkers, including both "the Hammerite" and Sawney Alexander.

Source: Rockbridge County, VA Deed Book C, p. 178, fide Jerry Penley. Commentary: The identification of "Cathy" as the wife of Joseph Walker would seem to be a reference to "Catherine Kelso" wife of Joseph Walker son of Alexander the Hammerite. It can probably be assumed that Joseph received a share in this property as an inheritance with "Jennett Walker, relict and widow of Alexander Walker". The location of the property on Cedar Creek, however, places this property near Natural Bridge. This suggests that Alexander the Hammerite is closely related to Samuel of Natural Bridge line. It seems likely that he is the son of Samuel of Natural Bridge, rather than the son of John Walker II of the Walker's Creek line, as given in White 1902. 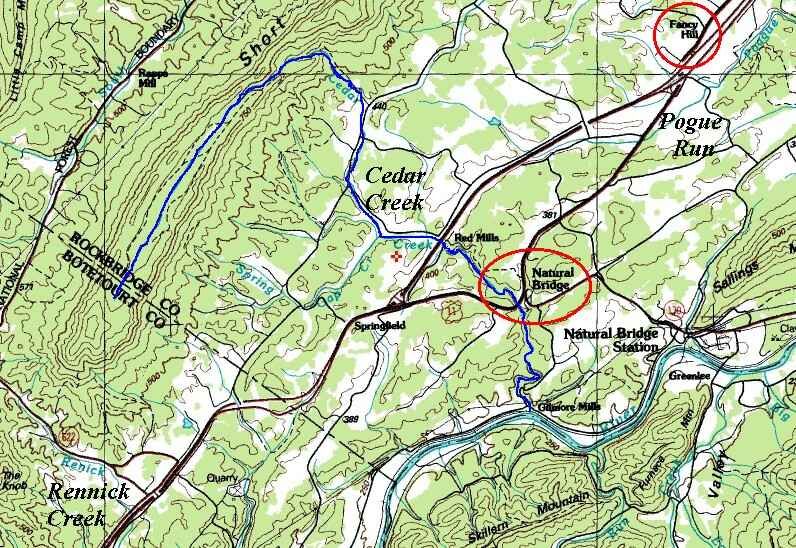