Gideon Burdick and his family lived in the Chautauqua, New York area. From references in the Utah Genealogical and Historical Magazine: "At the outlet of Lake Chautauqua, near Buffalo...the gospel message was brought,,, Gideon Burdick and family were baptized in June 1833. In November they joined the body of the Church in Kirtland, Ohio.

It seems that the religious fervor shown by Alden, his father, and earlier ancestors was a family affair, for his older brother Thomas was called as a clerk and later as a bishop. His brother Elias died in Pleasant Grove, Utah and thus also may be assumed to have been a member.

Created by the Mormon Prophet Joseph Smith (1805-1844) in early 1835, the Quorum of Seventy was to act as traveling and presiding ministers for the newly created The Church of Jesus Christ of Latter-day Saints. Many of these men performed notable works for the early church, living near then church headquarters in Kirtland, Ohio. The Quorum of Seventy itself did not meet as a governing body of the church and was not renewed until reorganized by the church in 1976.

A year later in February of 1835 he was called to become a Seventy and a member of the the First Quorum of the Seventy. He was ordained under the hands of the Prophet Joseph Smith and was the first Seventy to walk this earth since the days of the Savior! His brother-in-law, Hiram Winters was the second. The Lord had specifically designated the First Quorum as a quorum having equal authority with the First Presidency and the Twelve, thus, Elder Alden Burdick cemented his position as a General Authority. There is no evidence, however, that the First Quorum ever functioned as a governing quorum in the Kirtland-Missouri-Nauvoo era.

Alden Burdick proved staunch to the Church of the Latter Day Saints throughout all those days of trial and was devout in his manner of life. On his deathbed, he counseled his wife to follow the leaders of the church wherever they went.

Alden and Jerusha had been married about 1825, as their first-born, Columbus Burdick, was born in 1826, presumably in New York state.

With her family of 11 children, Jerusha Parks (1809-1883) emigrated to Utah about 1852. She lived for a time in Salt Lake City and supported her family by tailoring... (then) keeping a boarding place...(and later) gained a knowledge of medicine which she practiced as her profession in Carson City, Nev. and in California. Later...she returned to Farmington, Utah where she died (in 1883)."

Alden Burdick was born September 12, 1803 in Jamestown, Chataugua, New York, and that he was the son of Gideon Burdick and his wife Catherine Robertson. Gideon Burdick was a veteran of the Revolutionary War. There has always been a great tradition of patriotism in this family. The Burdick family has been in America since about 1650. There is also a history of Burdick ancestors searching for religious truth in earlier generations. Alden's ancestors were founding members of the Seventh-day Baptist Church (or Sabbatarians) in Newport Rhode Island and Westerly, Rhode Island, approximately between 1665 and 1671. 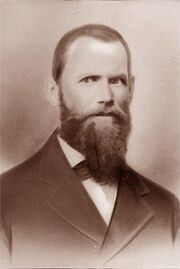