Adolf Hitler (German pronunciation: [ˈadɔlf ˈhɪtlɐ]; 20 April 1889 – 30 April 1945) was an Austrian-born German politician and the leader of the National Socialist German Workers Party (German: Nationalsozialistische Deutsche Arbeiterpartei, abbreviated NSDAP), commonly known as the Nazi Party. He was Chancellor of Germany from 1933 to 1945 and, after 1934, also head of state as Führer und Reichskanzler, ruling the country as an absolute dictator of Germany.

See also http://www.wargs.com/other/hitler.html for ancestors as far back as 9-g-grandparents.

Hitler's father, Alois Hitler, was an illegitimate child of Maria Anna Schicklgruber so his paternity was not listed on his birth certificate and he bore his mother's surname.[1][2] In 1842, Johann Georg Hiedler married Maria and in 1876 Alois testified before a notary and three witnesses that Johann was his father. [3] At age 39, Alois took the surname Hitler. This surname was variously spelled Hiedler, Hüttler, Huettler and Hitler, and was probably regularized to Hitler by a clerk. The origin of the name is either "one who lives in a hut" (Standard German Hütte), "shepherd" (Standard German hüten "to guard", English heed), or is from the Slavic word Hidlar and Hidlarcek. (Regarding the first two theories: some German dialects make little or no distinction between the ü-sound and the i-sound.)[2]

Despite this testimony, Alois' paternity has been the subject of controversy. After receiving a "blackmail letter" from Hitler's nephew William Patrick Hitler threatening to reveal embarrassing information about Hitler's family tree, Nazi Party lawyer Hans Frank investigated, and, in his memoirs, claimed to have uncovered letters revealing that Alois' mother, Maria Schicklgruber, was employed as a housekeeper for a Jewish family in Graz and that the family's 19-year-old son, Leopold Frankenberger, fathered Alois.[2] No evidence has ever been produced to support Frank's claim, and Frank himself said Hitler's full Aryan blood was obvious.[4] Frank's claims were widely believed in the 1950s, but by the 1990s, were generally doubted by historians.[5][6] Ian Kershaw dismisses the Frankenberger story as a "smear" by Hitler's enemies, noting that all Jews had been expelled from Graz in the 15th century and were not allowed to return until well after Alois was born.[6]

Adolf Hitler was born on 20 April 1889 at half-past six in the evening at the Gasthof zum Pommer, an inn in Braunau am Inn, Austria–Hungary, the fourth of Alois and Klara Hitler's six children.

At the age of three, his family moved to Kapuzinerstrasse 5[7] in Passau, Germany where the young Hitler would acquire Lower Bavarian rather than Austrian as his lifelong native dialect.[8] In 1894, the family moved to Leonding near Linz, then in June 1895, Alois retired to a small landholding at Hafeld near Lambach, where he tried his hand at farming and beekeeping. During this time, the young Hitler attended school in nearby Fischlham. As a child, he tirelessly played "Cowboys and Indians" and, by his own account, became fixated on war after finding a picture book about the Franco-Prussian War in his father's things.[9] He wrote in Mein Kampf: "It was not long before the great historic struggle had become my greatest spiritual experience. From then on, I became more and more enthusiastic about everything that was in any way connected with war or, for that matter, with soldiering."

His father's efforts at Hafeld ended in failure and the family moved to Lambach in 1897. There, Hitler attended a Catholic school located in an 11th-century Benedictine cloister whose walls were engraved in a number of places with crests containing the symbol of the swastika.[10] It was in Lambach that the eight year-old Hitler sang in the church choir, took singing lessons, and even entertained the fantasy of one day becoming a priest.[11] In 1898, the family returned permanently to Leonding.

His younger brother Edmund died of measles on 2 February 1900, causing permanent changes in Hitler. He went from a confident, outgoing boy who found school easy, to a morose, detached, sullen boy who constantly battled his father and his teachers.[12]

Hitler was close to his mother, but had a troubled relationship with his authoritarian father, who frequently beat him, especially in the years after Alois' retirement and disappointing farming efforts.[13] Alois wanted his son to follow in his footsteps as an Austrian customs official, and this became a huge source of conflict between them.[9] Despite his son's pleas to go to classical high school and become an artist, his father sent him to the Realschule in Linz, a technical high school of about 300 students, in September 1900. Hitler rebelled, and in Mein Kampf confessed to failing his first year in hopes that once his father saw "what little progress I was making at the technical school he would let me devote myself to the happiness I dreamed of." But Alois never relented and Hitler became even more bitter and rebellious.

For young Hitler, German Nationalism quickly became an obsession, and a way to rebel against his father, who proudly served the Austrian government. Most people who lived along the German-Austrian border considered themselves German-Austrians, but Hitler expressed loyalty only to Germany. In defiance of the Austrian monarchy, and his father who continually expressed loyalty to it, Hitler and his young friends liked to use the German greeting "Heil", and sing the German anthem "Deutschland Über Alles" instead of the Austrian Imperial anthem.[9]

After Alois' sudden death on 3 January 1903, Hitler's behaviour at the technical school became even more disruptive, and he was asked to leave. He enrolled at the Realschule in Steyr in 1904, but upon completing his second year, he and his friends went out for a night of celebration and drinking, and an intoxicated Hitler tore his school certificate into four pieces and used it as toilet paper. When someone turned the stained certificate in to the school's director, he "... gave him such a dressing-down that the boy was reduced to shivering jelly. It was probably the most painful and humiliating experience of his life."[14] Hitler was expelled, never to return to school again.

At age 15, Hitler took part in his First Holy Communion on Whitsunday, 22 May 1904, at the Linz Cathedral.[15] His sponsor was Emanuel Lugert, a friend of his late father.[16]

Early adulthood in Vienna and Munich

From 1905 on, Hitler lived a bohemian life in Vienna on an orphan's pension and support from his mother. He was rejected twice by the Academy of Fine Arts Vienna (1907–1908), citing "unfitness for painting", and was told his abilities lay instead in the field of architecture.[17]

On 21 December 1907, Hitler's mother died of breast cancer at age 47. Ordered by a court in Linz, Hitler gave his share of the orphans' benefits to his sister Paula. When he was 21, he inherited money from an aunt. He struggled as a painter in Vienna, copying scenes from postcards and selling his paintings to merchants and tourists. After being rejected a second time by the Academy of Arts, Hitler ran out of money. In 1909, he lived in a shelter for the homeless. By 1910, he had settled into a house for poor working men on Meldemannstraße.

Hitler served in France and Belgium in the 16th Bavarian Reserve Regiment (called Regiment List after its first commander), ending the war as a Gefreiter (equivalent at the time to a lance corporal in the British and private first class in the American armies). He was a runner, "a dangerous enough job"[18] on the Western Front, and was often exposed to enemy fire. He participated in a number of major battles on the Western Front, including the First Battle of Ypres, the Battle of the Somme, the Battle of Arras and the Battle of Passchendaele.[19] The Battle of Ypres (October 1914), which became known in Germany as the Kindermord bei Ypern (Massacre of the Innocents) saw approximately 40,000 men (between a third and a half) of the nine infantry divisions present killed in 20 days, and Hitler's own company of 250 reduced to 42 by December. Biographer John Keegan has said that this experience drove Hitler to become aloof and withdrawn for the remaining years of war.[20]

Hitler was twice decorated for bravery. He received the Iron Cross, Second Class, in 1914 and Iron Cross, First Class, in 1918, an honour rarely given to a Gefreiter.[21] However, because the regimental staff thought Hitler lacked leadership skills, he was never promoted to Unteroffizier (equivalent to a British corporal). Other historians say that the reason he was not promoted is that he was not a German citizen.

For a extensive biography of Adolph Hitler during WWII please see the Wikipedia article.

The most prominent and longest-living direct descendants of Adolf Hitler's father, Alois, was Adolf's nephew William Patrick Hitler. With his wife Phyllis, he eventually moved to Long Island, New York, changed his last name, and had four sons. None of William Hitler's children have had any children of their own.

Over the years, various investigative reporters have attempted to track down other distant relatives of the Führer. Many are now alleged to be living inconspicuous lives and have long since changed their last name.

Hitlermusso2 edit.jpg
Add a photo to this gallery 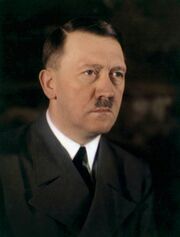