9999 Cave of the Patriarchs, Hebron, Land of Canaan

Abraham is always regarded in the Old Testament as founder of the covenant race, which is personified in the house of Israel. He is the “father of the faithful.” John the Baptist and Paul rebuked those holding the erroneous idea that natural descent from Abraham was by itself sufficient to secure God’s favor (Matt. 3:9; Rom. 9:7). For references to him in Jesus’ teachings see Matt. 8:11; Luke 16:22; John 8:56.

There are several accounts that list the ancestry of Abraham back to Adam (4004 BC-3074 BC).

24 And Nahor lived nine and twenty years, and begat Terah:
25 And Nahor lived after he begat Terah an hundred and nineteen years, and begat sons and daughters.
26 And Terah lived seventy years, and begat Abram (Abraham), Nahor, and Haran.
27 Now these are the generations of Terah: Terah begat Abram, Nahor, and Haran; and Haran begat Lot.
28 And Haran died before his father Terah in the land of his nativity, in Ur of the Chaldees.
29 And Abram and Nahor took them wives: the name of Abram’s wife was Sarai; and the name of Nahor’s wife, Milcah, the daughter of Haran, the father of Milcah, and the father of Iscah.
30 But Sarai was barren; she had no child.
31 And Terah took Abram his son, and Lot the son of Haran his son’s son, and Sarai his daughter in law, his son Abram’s wife; and they went forth with them from Ur of the Chaldees, to go into the land of Canaan; and they came unto Haran, and dwelt there.
32 And the days of Terah were two hundred and five years: and Terah died in Haran.
Genesis 11:24-32

Latter-day revelation has clarified the significance of the Abrahamic covenant and other aspects of Abraham’s life and ministry. We learn that he was greatly blessed with divine revelation concerning the planetary system, the creation of the earth, and the premortal activities of the spirits of mankind. One of the most valiant spirits in the premortal life, he was chosen to be a leader in the kingdom of God before he was born into this world (Abr. 1–5). We also learn from latter-day revelation that because of Abraham’s faithfulness he is now exalted and sits upon a throne in eternity (D&C 132:29, 37).

Judaic (Book of Jubilees Ch 11), Islamic and Latter-day Saint Narratives speak to the great idolatry in his father's household and some attempts to sacrifice Abraham to idols which he resisted and overcame. Some of this literature describes him as a smart man that turn to God in prayer for his deliverance.

In (Gen 12:1-4) Abram is commanded to leader his father's household, at age 75, taking his nephew Lot, his wife Sarai, daughter of Terah with him. (That would indicate his being married to her before then.) They went to the Land of Canaan which God promises him for an inheritance, but because of famine there, they travel onto Egypt. There they tell the Pharoah and others that Sarai is his sister.

And Abraham gave all that he had unto Isaac. But unto the sons of the concubines, which Abraham had, Abraham gave gifts, and sent them away from Isaac his son, while he yet lived, eastward, unto the east country. And these are the days of the years of Abraham’s life which he lived, an hundred threescore and fifteen years. Then Abraham gave up the ghost, and died in a good old age, an old man, and full of years; and was gathered to his people. And his sons Isaac and Ishmael buried him in the cave of Machpelah, in the field of Ephron the son of Zohar the Hittite, which is before Mamre; The field which Abraham purchased of the sons of Heth: there was Abraham buried, and Sarah his wife.(Genesis 25:5-10)

Abraham was a very righteous man, yet on multiple occassions he introduced Sarah as his sister instead of his wife. This has led to some speculation that he had married either a step-sister or niece.

The story of Hagar, handmaid of Sarah is found in Genesis 16. After many years, and Sarai was childless, she gave Hagar to Abram as his wife. After conceiving a child.—Hagar flees from Sarai—An angel commands Hagar to return and submit herself to Sarai—Hagar bears Ishmael.

Sarah died, and Abraham buried her in the Cave of the Patriarchs (the "cave of Machpelah"), near Hebron which he had purchased along with the adjoining field from Ephron the Hittite.[Genesis 23:1–20] After the death of Sarah, Abraham took another wife, a concubine named Keturah, by whom he had six sons: Zimran, Jokshan, Medan, Midian, Ishbak, and Shuah.[Genesis 25:1–6] According to the Bible, reflecting the change of his name to "Abraham" meaning "a father of many nations", Abraham is considered to be the progenitor of many nations mentioned in the Bible, among others the Israelites, Ishmaelites,[Genesis 25:12–18] Edomites,[Genesis 36:1–43]) Amalekites,[Genesis 36:12–16] Kenizzites,[Genesis 36:9–16] Midianites and Assyrians,[Genesis 25:1–5] and through his nephew Lot he was also related to the Moabites and Ammonites.[Genesis 19:35–38] Abraham lived to see his son marry Rebekah, (and to see the birth of his twin grandsons Jacob and Esau). He died at age 175, and was buried in the cave of Machpelah by his sons Isaac and Ishmael.[Genesis 25:7–10][1 Chronicles 1:32]

1 Then again Abraham took a wife, and her name was Keturah. And she bare him Zimran, and Jokshan, and Medan, and Midian, and Ishbak, and Shuah. And Jokshan begat Sheba, and Dedan. And the sons of Dedan were Asshurim, and Letushim, and Leummim. And the sons of Midian; Ephah, and Epher, and Hanoch, and Abida, and Eldaah. All these were the children of Keturah. (Genesis 25:1-4) 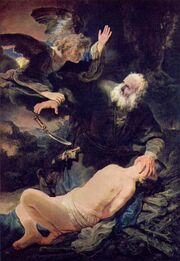