Abigail was born in Weymouth to William Smith and Elizabeth Quincy on November 11, 1744. By the calendar we use today, it would be November 22. On her mother's side she was descended from the Quincys, a well-known family in the Massachusetts colony, by whom she descended from King Edward I of England and King Edward III of England[1] [2]. Her father and other forebearers were Congregational ministers, and leaders in a society that held its clergy in high esteem.

Although she did not receive a formal education, her mother who taught her and her sisters Mary (1741-1811) and Elizabeth (known as Betsy) to read, write, and cipher; her father's large library enabled them to study English and French literature. As an intellectually open minded woman for her day, Abigail's ideas on women's rights and government would eventually play a major role, albeit indirectly, in the founding of the U.S.

Abigail Smith married John Adams in 1764, just before her 20th birthday. John and Abigail Adams lived in Braintree (later renamed Quincy) before moving to Boston where his practice expanded. In ten years she gave birth to five children: Nabby (1765-1813), the future President John Quincy Adams (1767-1848), Susanna Boylston (1768-1770), Charles (1770-1800), and Thomas Boylston (1772-1832). A cairn now crowns the nearby hill from which she and her son John Quincy Adams watched the Battle of Bunker Hill and burning of Charlestown. At that time she was minding the children of Dr. Joseph Warren, President of the Massachusetts Provincial Congress, who was killed in the battle.

Adams is remembered today for the many letters she wrote to her husband while he stayed in Philadelphia, during the Continental Congresses. Many consider them to be invaluable eyewitness accounts of the Revolutionary War home front as well as excellent sources of political commentary. John Adams frequently sought the advice of his wife on many matters, and their letters are filled with intellectual discussions on government and politics. Passages from those letters figured prominently in songs from the Broadway musical 1776 (and the 1972 film of it, with Virginia Vestoff as Abigail Adams). She is known for her request that he and the Continental Congress:

...remember the ladies, and be more generous and favorable to them than your ancestors. Do not put such unlimited power into the hands of the Husbands. Remember all Men would be tyrants if they could. If particular care and attention is not paid to the Ladies we are determined to foment a Rebellion, and will not hold ourselves bound by any Laws in which we have no voice, or Representation.

John answered:...as to your extraordinary code of laws, I cannot but laugh...Depend upon it, we know better Than to repeal our masculine systems... In 1784, she and her daughter Abigail, who was known in the family as 'Nabby', joined her husband and her eldest son, John Quincy at his diplomatic post in Paris. After 1785, she filled the role of wife of the first United States Minister to the Kingdom of Great Britain. They returned in 1788 to a house known as the "Old House" in Quincy, which she set about vigorously enlarging and remodeling. It is still standing and open to the public as part of Adams National Historical Park. Nabby later died of breast cancer.

As wife of the second President of the United States, Adams became a very good friend to Martha Washington and helped in entertaining at official functions, (generally known then as levees). Her experience of royal courts and society abroad proved to be invaluable. After 1791, her poor health forced her to spend most of her time in Quincy.

When John Adams was elected President of the United States, she continued a formal pattern of entertaining, becoming the first hostess of the yet uncompleted White House. Her account of the new but very incomplete Georgian mansion is quite entertaining. She mentioned that fires had to be lit constantly to keep the cold, cavernous place warm and she describes setting up her laundry in one of the great rooms.

The Adamses retired to Quincy in 1801 after John Adams' defeat in his bid for a second term as President of the United States. She followed her son's political career earnestly as her letters to contemporaries show.

Abigail Adams died on October 28, 1818 of typhoid fever, and is buried beside her husband in a crypt located in the United First Parish Church (also known as the Church of the Presidents).

Her last words were "Do not grieve, my friend, my dearest friend. I am ready to go. And John, it will not be long."

An Adams Memorial is proposed in Washington, D.C., honoring Abigail, her husband, and other members of their family.

Wikiquote has a collection of quotations by or about:
Abigail Adams

The First Spouse Program under the Presidential $1 Coin Act authorizes the United States Mint to issue 1/2 ounce $10 gold coins to honor the first spouses of the United States. Abigail Adams's coin was released on June 19, 2007, and sold out in just hours. 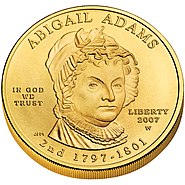 Reverse
Add a photo to this gallery
Retrieved from "https://familypedia.wikia.org/wiki/Abigail_Smith_(1744-1818)/biography?oldid=1175576"
Community content is available under CC-BY-SA unless otherwise noted.