Charles Clifford Anderson was my grandfather. He was the fifth child of Council Anderson and Bessie Watson and was born near Hawkinsville,GA. Growing up, he was known as Charlie, but we called him Andy by the time I was born. His parents were farmers and may have retained much of the property that his grandfather had (not at all sure about this though). Council is also supposed to have operated a general store. I am told that Andy first saw an airplane a the age of 6 (1909/10), no small event as the Wright brothers did not first fly theirs until 1903. I know nothing of his schooling in Hawkinsville. Unfortunately, by the age of 14 (1917/18), Andy and his father were not getting along. The last straw appears to have been Council's reaction when Andy's dog got rabies. Council told him that it was his dog and he would have to shoot it himself to put it out of its misery. Whether or not Andy did the deed is not known, but he did leave home shortly thereafter.

Andy departed Hawkinsville and moved in with his uncle in Hunstville, Alabama. This uncle, Charles Clifford Anderson, was Council's older brother and Andy's namesake. He had studied in Maryland to be a pharmacist and moved to Hunstville after marrying a native of that city, Leila Worthem Coles. His brother, Carl Sanders Anderson, was also a pharmacist in Hunstville. The older Charles operated Anderson Drugs (or Apothecary), a Huntsville staple for many years. Andy attended Huntsville High School where I am told he was the fastest boy in school. After graduation, he lived and worked in Hunstville for the next seven or eight years. But in 1929, Andy decided to move south to the fast growing city of Birmingham, AL, most likely to pursue more gainful employment.

It is not known if Andy was driven south by the start of the Great Depression that year, but it could not have been easy to find employment. After finding a job, he worked hard for the next several years, earning a "responsible position" with Avondale Mills. My father said the responsible position included being a part of the management training program. This is the position he held when he met my grandmother.

My grandparents had a mutual friend in Raymond "Red" Adams and his girlfriend (or wife) Louise. Louise set Andy and Chrystobel up on a double date with Red and herself. A relationship sparked from there and led to their marriage in 1936 in her Episcopal church (he was Baptist). They honeymooned in New Orleans, with Andy driving the whole way. They then settled at the Fleetwood Apartments. In 1940, they moved into a new home at 2101 22nd Avenue South (now English Village Lane). Life did not remain rosy for the young couple, though.

The trouble began at Avondale Mills. Andy was stressed out by his job and he eventually quit (not exactly sure when). Then, once the US entered World War II, he found employment at the Alabama Ordnance Works plant in Childersburg, AL. At its height during the war effort, this plant employed 14,000 workers around the clock to produce smokeless powder and 5 million pounds of TNT per month. It also produced some of the heavy water used in the Manhattan Project. It was naturally tightly secured and Chrystobel worried for Andy's safety everyday. After the war (I think), he enrolled in the University if Alabama Extension Center (now the University of Alabama at Birmingham), studying engineering in the old Hillman Hospital. After graduation (I think), he began working for an industrial laundry, mostly maintaining their equipment. He eventually found employment with the Bayliss Machine & Welding Co., where he would remain until his forced retirement (due to age) in 1977.

Also during this period, Andy and Chrystobel welcomed two children, my Aunt Eleanor and my father. Andy was very busy working, but sometimes took my father along. All the machine shop work greatly impressed my father. Chrystobel remained at home and became verbally abusive to her children and to her husband as she became increasingly unhappy. She stressed over everything: school, finances, my dad playing sports, Eleanor's various doings, etc. Forced to drop out of college due to the Depression, Chrystobel insisted that her children not miss any school unless they were deathly ill. Life continued in this pattern until Eleanor went to college at Alabama. She would later drop out to get married, much to her mother's chagrin. My father went to college as well and had a very good time. Then, just after his freshman year, tragedy struck the family.

Eleanor had come back from getting groceries. She took her young daughter out of the car and then as she returned, she saw the car begin rolling down the hill. Trying desperately to stop it, it ran her over. She died an hour later at the hospital. The whole family took it hard, but my grandmother was hit hardest. She actually had to be committed for a short time. She would dwell on Eleanor's death for the rest of her life.

Andy continued working. My father got married and then my grandfather lost his job. Within a couple of years, Dad took his father to work with him at Wittichen Supply Co., where my grandfather did any odd job he could, mostly gluing shut boxes of Freon. He began to suffer strokes that slowed him down and deteriorated his quality of life.

This is about when I remember him. He did not say much and what he did you could hardly understand. He used to greet me with, "Hello, young fellah", but that is about all I can remember him saying. Chrystobel did most of the talking. He was always very slow to move from one place to another, moving from a cane to a walker and finally to a wheelchair. He deteriorated quickly after Chrystobel's death. His last days were spent on a respirator and feeding tube in our basement. A power outage landed him in the hospital while I was in school and he died shortly thereafter.

Grandaddy Andy, as we called him, was a very kind man. I could not imagine him hurting a soul. We took Chrystobel and him with us on trips and he snored loudly, but otherwise caused no trouble. My favorite memory of him was at the beach. He would shuffle outside and rest himself against a landed catamaran and stare out into the gulf. Never said a word, but then he rarely ever did. 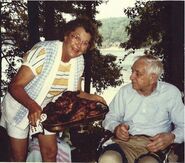 Andy Anderson looking forward to a good holiday meal provided by Ivy Wittichen at Inland Lake - c. 1990
Add a photo to this gallery

Retrieved from "https://familypedia.wikia.org/wiki/Charles_Clifford_Anderson_(1903-1993)?oldid=718601"
Community content is available under CC-BY-SA unless otherwise noted.